Another reminder why I shouldn't be using Verizon 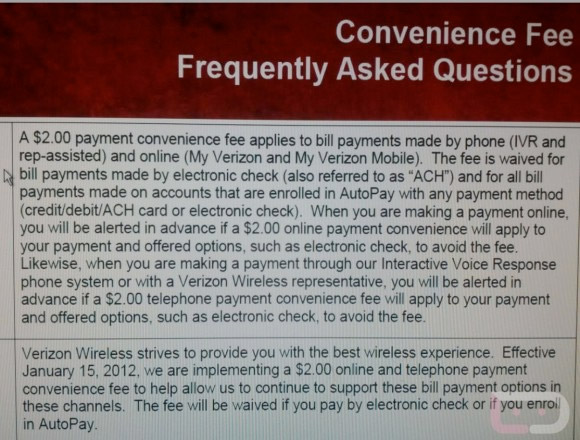 You are looking at Verizon's latest money grabbing scam! Get ready to pay 2 extra dollars a month. That is unless you pay by AutoPay or electronic check, which bypasses the credit card fee's passed on to the carrier. I'm sure for most this will be a non issue. I guess I'm in the camp that believes that having to pay a fee to pay your bill is kind of ridiculous. I'll patiently wait for other corporations to follow suit. Check it out!

Update: That didn't take long. Looks like Verizon is back backpedaling at full speed.

Verizon Wireless has decided it will not institute the fee for online or telephone single payments that was announced earlier this week.
The company made the decision in response to customer feedback about the plan, which was designed to improve the efficiency of those transactions. The company continues to encourage customers to take advantage of the numerous simple and convenient payment methods it provides.

"At Verizon, we take great care to listen to our customers. Based on their input, we believe the best path forward is to encourage customers to take advantage of the best and most efficient options, eliminating the need to institute the fee at this time," said Dan Mead, president and chief executive officer of Verizon Wireless.

â€œThis is a major safety achievement,â€ said Secretary LaHood. â€œWe made a promise to the traveling public that we would do everything possible to make sure pilots are rested when they get in the cockpit. This new rule raises the safety bar to prevent fatigue.â€

â€œEvery pilot has a personal responsibility to arrive at work fit for duty. This new rule gives pilots enough time to get the rest they really need to safely get passengers to their destinations,â€ said FAA Acting Administrator Huerta.

The Department of Transportation identified the issue of pilot fatigue as a top priority during a 2009 airline Safety Call to Action following the crash of Colgan Air flight 3407. The FAA launched an aggressive effort to take advantage of the latest research on fatigue to create a new pilot flight, duty and rest proposal, which the agency issued on September 10, 2010.

Key components of this final rule for commercial passenger flights include:

Varying flight and duty requirements based on what time the pilotâ€™s day begins. The new rule incorporates the latest fatigue science to set different requirements for pilot flight time, duty period and rest based on the time of day pilots begin their first flight, the number of scheduled flight segments and the number of time zones they cross. The previous rules included different rest requirements for domestic, international and unscheduled flights. Those differences were not necessarily consistent across different types of passenger flights, and did not take into account factors such as start time and time zone crossings.

Flight duty period. The allowable length of a flight duty period depends on when the pilotâ€™s day begins and the number of flight segments he or she is expected to fly, and ranges from 9-14 hours for single crew operations. The flight duty period begins when a flightcrew member is required to report for duty, with the intention of conducting a flight and ends when the aircraft is parked after the last flight. It includes the period of time before a flight or between flights that a pilot is working without an intervening rest period. Flight duty includes deadhead transportation, training in an aircraft or flight simulator, and airport standby or reserve duty if these tasks occur before a flight or between flights without an intervening required rest period.

New cumulative flight duty and flight time limits.The new rule addresses potential cumulative fatigue by placing weekly and 28-day limits on the amount of time a pilot may be assigned any type of flight duty. The rule also places 28-day and annual limits on actual flight time. It also requires that pilots have at least 30 consecutive hours free from duty on a weekly basis, a 25 percent increase over the old rules.

Fitness for duty. The FAA expects pilots and airlines to take joint responsibility when considering if a pilot is fit for duty, including fatigue resulting from pre-duty activities such as commuting. At the beginning of each flight segment, a pilot is required to affirmatively state his or her fitness for duty. If a pilot reports he or she is fatigued and unfit for duty, the airline must remove that pilot from duty immediately.

Fatigue Risk Management System. An airline may develop an alternative way of mitigating fatigue based on science and using data that must be validated by the FAA and continuously monitored.

In 2010, Congress mandated a Fatigue Risk Management Plan (FRMP) for all airlines and they have developed these plans based on FAA guidance materials. An FRMP provides education for pilots and airlines to help address the effects of fatigue which can be caused by overwork, commuting, or other activities. Airlines will be required to train pilots about the potential effects of commuting.

Required training updates every two years will include fatigue mitigation measures, sleep fundamentals and the impact to a pilotâ€™s performance. The training will also address how fatigue is influenced by lifestyle â€“ including nutrition, exercise, and family life â€“ as well as by sleep disorders and the impact of commuting.

The estimated cost of this rule to the aviation industry is $297 million but the benefits are estimated between $247- $470 million. Covering cargo operators under the new rule would be too costly compared to the benefits generated in this portion of the industry. Some cargo airlines already have improved rest facilities for pilots to use while cargo is loaded and unloaded during night time operations. The FAA encourages cargo operators to opt into the new rule voluntarily, which would require them to comply with all of its provisions.

The final rule has been sent to the Federal Register for display and publication. It is currently available at:http://www.faa.gov/regulations_policies/rulemaking/recently_published/media/2120-AJ58-FinalRule.pdf, and will take effect in two years to allow commercial passenger airline operators time to transition.

A fact sheet with additional information is at http://www.faa.gov/news/fact_sheets/.